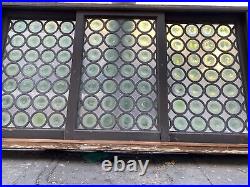 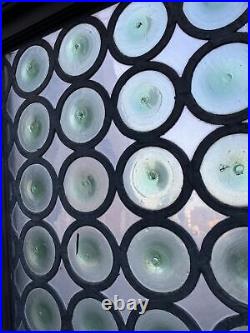 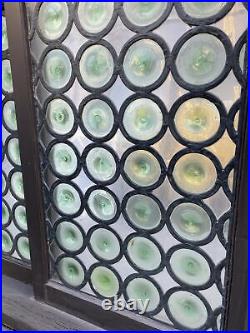 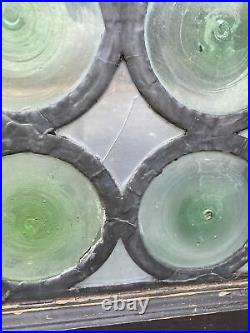 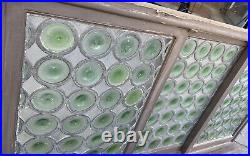 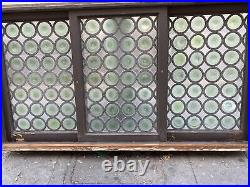 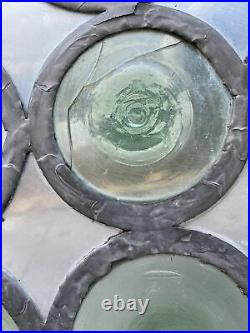 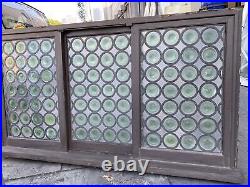 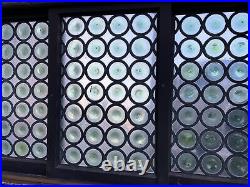 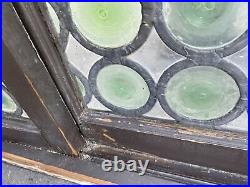 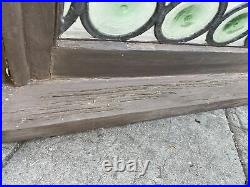 Spanish Rondale glass window 70×38. This is such an amazing window. It is very rare for the old original glass to surface nowadays let alone set into a window like this. This type of style was often used with the old Spanish Architectural design along with stained glass and the old Spanish Accidentals giving the regular glass windows great character and truly capturing the style of the eras. This particular window was done in an amazing green tone which was very popular and often used with the dark green, dark burgundy, and rich tones of gold. This window is in very good condition concerning its age there are a couple of tiny fractures in the glass but nothing to major. It seems as though the center window possibly slides open but is tight from debris. We do not want to mess with the window in any way but believe it does function There is some weathering to the frame on the exterior. This window would definitely be worth restoring. It is hard to find any of the old original windows even in a single small window. We tried to include all details in the photos. Glass rondels are circular panes of mouth-blown glass that were commonly used in leaded windows in Medieval European and turn-of-the-20th century Revival architecture. Also known as Crown glass an early type of window glass. In this process, glass was blown into a “crown” or hollow globe. This was then transferred from the blowpipe to a punty and then flattened by reheating and spinning out the bowl-shaped piece of glass (bullion) into a flat disk by centrifugal force, up to 5 or 6 feet (1.5 to 1.8 metres) in diameter. The glass was then cut to the size required. The thinnest glass was in a band at the edge of the disk, with the glass becoming thicker and more opaque toward the center. Known as a bullseye, the thicker center area around the pontil mark was used for less expensive windows. To fill large window spaces with the best glass, many small diamond shapes were cut from the edge of the disk. These were mounted in a lead lattice work and fitted into the window frame. Crown glass was one of the two most common processes for making window glass until the 19th century. The other was blown plate. Crown glass window panes with ceramic frames have been found at Soba East, the medieval capital of Alodia. They are only 110-115 millimetres (4.3-4.5 in) in diameter and were probably used to provide light in storerooms. [2] The process of making crown glass window panes was perfected by French glassmakers in the 1320s, notably around Rouen, and was a trade secret. Hence crown glass was not made in London until 1678. All items Salvaged by Erics Architectural Salvage of LA and are located at 1540 w 6th st Los Angeles Ca 90017. This item is in the category “Antiques\Architectural & Garden\Stained Glass Windows”. The seller is “ericstiques2kmz” and is located in this country: US. This item can be shipped to United States.